The Humphrey School of Public Affairs is pleased to announce that Marshall Johnson, chief conservation officer for Audubon, will be the next speaker in its Advancing Climate Solutions. Now. Climate Policy Series.

Johnson will speak about the pivotal role that birders can play in addressing the climate crisis on Thursday, November 10 at 6 p.m. CT at Northrop, at the University of Minnesota. His remarks will be followed by a conversation with Kathryn Hoffman, chief executive officer of the Minnesota Center for Environmental Advocacy.

We are facing a climate crisis of epic proportions, which threatens life on Earth as we know it. “Climate change is a bird issue,” Audubon declares, noting in a recent report that 65 percent of North American bird species are at risk of extinction due to climate change.

Founded in 1905, Audubon is an environmental organization dedicated to the conservation of birds and their natural habitats throughout the Americas. At the heart of Audubon’s movement is a powerful coalition of millions of people connected by conservation, climate, and the power of birds. The federal government puts the number of birders in the United States at 47 million.

“Birds tell us—and we lead by learning, listening, and acting,” says Johnson, who joined  Audubon 12 years ago and held a variety of positions before being named chief conservation officer in January of this year. In that role, Johnson leads the strategic direction for hemispheric-wide conservation work at Audubon to address the climate change and biodiversity crises facing birds.

Another of his priorities is to build “a more equitable and diverse birding movement. Audubon has a vital role to play in partnership with farmers, ranchers, hunters, anglers, indigenous stewards, communities of all colors, people of faith, businesses, and policymakers in securing the future for birds and the planet in this decisive decade.”

Marshall Johnson assumed the role of Audubon’s chief conservation officer in January 2022. He previously served as vice president for Audubon Dakotas where he raised more than $50 million, spearheading the development and launch of the Northern Great Plains Grasslands project, which has conserved nearly 500,000 acres across the Dakotas, enrolling over 300 farmers, ranchers and communities.

Johnson serves on the boards of the U.S Prairie Pothole Joint Venture and the North Dakota Natural Resources Trust.

He is a 2012 alumnus of the University of Minnesota Crookston, where he earned a bachelor’s degree in business management. Johnson received the University’s Abbey–Young Alumni Award in 2021. He resides in Fargo, North Dakota.

This event is made possible due to the support of the Swain Climate Policy Series, which mobilizes civic engagement to confront the climate crisis. Previous speakers in the series were former Vice President and climate activist Al Gore, and environmental scientist Katharine Hayhoe. 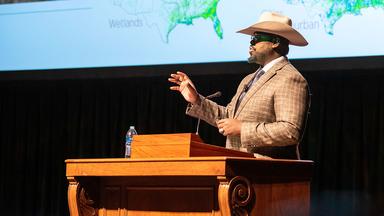