Alumna Acooa Ellis is a 'Steady Hand on the Wheel'

“We start all of our work by listening,” says Ellis. It’s an approach that’s proven more crucial than ever in the four tumultuous years she’s served as senior vice president for community impact at GTCUW.

In May, the Humphrey School honored Ellis with a Public Leadership Award for her work serving the community.

Long dedicated to improving communities through workplace giving, today GTCUW is reshaping itself as a “nexus,” as Ellis puts it, amplifying the needs of community nonprofit partners and helping them advance racial and economic justice.

This requires setting aside old suppositions, analyzing pertinent data, and really hearing the perspectives of people most impacted by public policies. All are skills Ellis began cultivating as an undergraduate at the University of Iowa and further honed at the Humphrey School.

She counts Myers, along with former Minneapolis Mayor Sharon Sayles Belton (who supervised Ellis’s Humphrey School internship) and the late Kris Nelson of the Center for Urban and Regional Affairs, as cherished mentors.

“I learned hardcore analytical skills to really support my curiosity. I can ask better questions because of that critical analysis,” she says.

“So much of what is required to be effective at solving public issues is having people who are directly impacted, who have a lived experience related to it, at the table informing those decisions,” Ellis says. That hasn’t always been the norm in government—or in what some sardonically refer to as the “nonprofit industrial complex.”

Prior to joining GTCUW, Ellis worked for the city of St. Paul and for Catholic Charities of St. Paul and Minneapolis, where she served as director of social justice advocacy. In between those roles, Ellis was a government affairs manager at Target.

Advancing systemic change in the Twin Cities, which has some of the nation’s biggest racial disparities in employment, earnings, housing, and education, is challenging work.

Ellis sees her job as “holding up a mirror to help people understand how they are party to or beneficiary of a particular challenge—all in service to removing barriers, building bridges, and actualizing possibility.”

As COVID-19 exploded, exacting a heavy toll on economic and social well-being, Ellis and her GTCUW colleagues convened a host of nonprofits, foundations, associations, and state policymakers to seek solutions for struggling Minnesotans. “Because we operate a 24/7 resource helpline, we were able to elevate the trends that we were seeing in terms of calls coming into the line,” Ellis says.

“We were able to see what was happening across the state: While housing is always a big issue, and emergency shelter had been a really big ask, people were looking for rental assistance. They were trying to stay in their homes” in the face of job loss, school and childcare closures, and health concerns. “We were able to take that information and make it a big part of our advocacy agenda at the Capitol. And ultimately the governor [and Legislature] made CARES Act dollars available for rental assistance—that was the initial infusion.”

[At the Humphrey School] I learned hardcore analytical skills to support my curiosity. I can ask better questions because of that critical analysis.

The initiative aims to provide wraparound support—services like case management, mental health counseling, and job training—for people within these segments of the population as they transition from foster care or incarceration. “I’m super passionate about it.”

Rooted in the knowledge that 80 percent of a child’s brain development happens by age 3, the effort will provide $1.2 million in grants to nine metro early childcare centers to support trauma-sensitive caregiving and help families leverage other resources. It’s part of $12.1 million in grants to local nonprofits that the GTCUW is making this year to fight racial and economic inequity.

Two years after COVID-19’s onset and the murder of George Floyd, Ellis is cautiously hopeful about the path many Twin Citians are on. “We’ve been talking about this racial reckoning. I don’t think we’ve really reckoned with anything yet, [but] we’ve uncovered a lot.”

To a large extent, Ellis says, “I believe the reckoning is internal, and we’re still very resistant to that. I have seen folks who are happy to tell others what they need to do. I am often exhausted by virtue signaling with no real action behind it, or thoughtfulness or critical thought. [M]ost draining is the people who would externalize their positive intent and not do a real hardcore internal assessment,” which she believes makes it easier to demonize others and fuels polarization.

Ellis strives for what she calls “equilibrium” in her life. Time with her husband and 9-year-old son helps nourish and restore her. She’s also committed to staying physically fit.

“In the pandemic, running became . . . running, I’m using that term really liberally,” Ellis pauses, then laughs uproariously. “I’m not going fast and I’m not going far, but I’m moving. I tell people it’s like a fast walk with a bop shoulder.”

As daunting as her work can sometimes feel, the proud Humphrey School alum is thankful to be doing it. “There are times when I feel impatient,” Ellis says. “But there are far more times where I’m grateful that I’m in this role for such a time as this.” 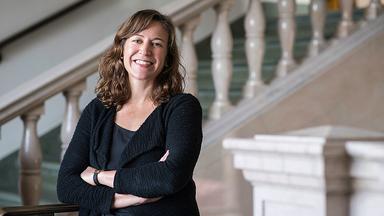 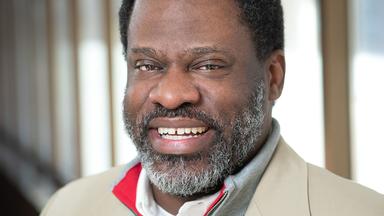