Friends and supporters of the Humphrey School of Public Affairs gathered for a spirited celebration of public service May 25 to recognize four distinguished recipients of the 2022 Hubert H. Humphrey Public Leadership Awards.

In addition, Humphrey School alumna Lee Wallace (MPP ‘05) received the University of Minnesota’s Outstanding Achievement Award, the highest award the University presents to alumni. Wallace is the owner and CEO of Peace Coffee.

Nearly 300 people, including dignitaries from politics, business, and the nonprofit sector, were in attendance to recognize the awardees and help raise money to fund scholarships for Humphrey School students. The event was co-presented by Best Buy and Target.

See photos from the event

Humphrey School Dean Nisha Botchwey welcomed the attendees to the in-person gathering, which was postponed for two years due to the pandemic.

Botchwey acknowledged the “sobering few years we have had.” In addition to the pandemic, she noted the event fell on the two-year anniversary of the death of George Floyd at the hands of Minneapolis police officers, and that a mass shooting at an elementary school in Texas occurred just the day before.

“Policy is what leads to real change” in our society, Botchwey said, “and that’s what we do here at the Humphrey School. Policy is the foundation for the rules and structures of society that lead to the changes that [allow] everyone to thrive. This is a reminder of why we’re all here – to support future generations of public policy and public affairs leaders, so they can be part of the important work of solving these wicked problems.”

She thanked this year’s awardees for “the example you set that inspires each of us to do our part to advance the common good.” 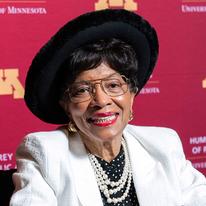 Reatha Clark King, PhD, is well known for her pioneering service in chemistry, higher education, business, philanthropy, and community service. Over her distinguished career, she served as president of Metropolitan State University and held leadership positions at General Mills and the General Mills Foundation, where she oversaw its philanthropy and citizen programs.

Friends and colleagues describe King as fearless, bold, and the embodiment of what leadership is all about. Her son, Scott King, accepted the award on her behalf.

“Her willingness to lead was not so much guided by who you were, but ‘what could you do for the cause at hand?’” he said. “As a young man I quickly realized that leadership to this Dr. King was not defined by where her office was, where she was seated at the table, or where she was placed in a photo opp. I believe it was more defined by a simple question, ‘what did we (the team) accomplish today?” 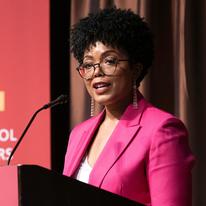 Acooa Ellis, a 2007 graduate of the Humphrey School, is senior vice president of community impact at Greater Twin Cities United Way. Ellis directs United Way’s work in grant making, coalition engagement, systems change, public policy, and the organization’s 24/7 information and crisis services. Ellis is a champion for equity who has worked to advance critical business and civic objectives through leadership on numerous complex change efforts across the region and state.

Ellis said her time at the Humphrey School inspired her to become an advocate for affordable housing.

“I was really struck by the importance of a stable place to call home to one’s overall well-being. It’s reflected in the work I’m doing right now at Greater Twin Cities United Way. Household stability is at the core of our community development impact work,” she said. “What my time at the Humphrey School taught me was faith in my own abilities and faith in what I can learn.” 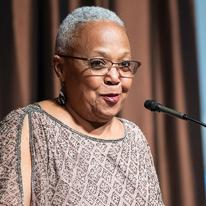 Tracey Williams-Dillard is CEO and publisher of the Minnesota Spokesman-Recorder. Established in 1934, it is the oldest Black-owned business and newspaper in Minnesota and one of the longest-standing, family-owned newspapers in the country.

Williams-Dillard is the granddaughter of the paper’s founder, and continues to fulfill its mission to provide news and information focused on community empowerment and education, while championing underrepresented voices.

The importance of the Spokesman-Recorder became even more evident two years ago with the murder of George Floyd, which took place just a few blocks from the newspaper’s building. “It was devastating,” she said. “If we’re not there to tell their story and be their voice, it’s silent. We can’t be silenced. We have to continue to tell the story.”

Xcel Energy, a utility company serving eight states in the West and Midwest, has pledged to reduce carbon emissions 80 percent by 2030, and deliver 100 percent carbon-free electricity to its customers by 2050.

Brett Carter, group president of utilities and chief customer officer, accepted the award on behalf of the company. He noted that Xcel Energy was the first publicly traded utility in the country to commit to going carbon free by 2050.

“We have 11,000 people who wake up every day and say, ‘we want to be a leader in the clean energy transition. We want to make our communities a safer, much cleaner environment,’” he said. 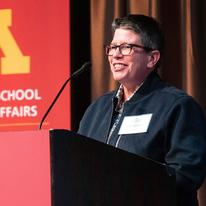 Lee Wallace is the owner and CEO of Peace Coffee. She received the University’s Outstanding Achievement Award for her efforts to promote fair trade practices while growing a successful business.

Wallace is recognized as a trailblazer in organic, ethically sourced, sustainable coffee, and her company works with remote coffee farmers in 11 countries to support cooperatives that pay industry-leading prices to producers.

Wallace earned her Master of Public Policy at the Humphrey School in 2005. “There are so many aspects to what the Humphrey School taught about good leadership, and approaching things with an international perspective,” she said. “I have the opportunity to create a truly ethical business, because you’re involved in all the steps along the way.”

The Public Leadership Awards were established in honor of the Humphrey School’s namesake, Hubert H. Humphrey. Proceeds from the event support scholarships for Humphrey School students.

See photos from the event