Students at the Humphrey School of Public Affairs have a new opportunity to learn more about tribal relations, thanks to the school’s expanding collaboration with the University of Minnesota Duluth’s Department of American Indian Studies (AIS).

The department recently developed a series of certificate programs specializing in tribal governance issues, which are open to Humphrey School students as well as other graduate and professional students from around the University of Minnesota system.

The certificate programs are another avenue for Humphrey School students to become familiar with tribal governance and sovereignty; a state-tribal relations workshop was added to the School’s course offerings in 2020.

The four graduate certificates, established in the past year, cover the following areas:

The certificates are in addition to the undergraduate and master’s degree programs AIS offers in tribal governance. They require fewer credits, can be completed more quickly, and are fully online.

As with the degree programs, Bauerkemper said the certificates’ coursework was developed after consulting with tribal governments.

“We decided to offer certificate programs because some prospective students were nervous about committing to a full-blown master’s degree program,” Bauerkemper said. “It’s a good pathway for teaching new skills.”

Humphrey School students are a good match for the certificate programs, he added, because many of them will find careers in state and local governments and will eventually be dealing with Indian tribes, which are their own sovereign nations.

“Those settler governments need to have competency in tribal relations and Indian law, and are looking for this expertise,” he said. “Humphrey School students are on a trajectory to be in important positions of decision making, so we want them to have some experience in this area.”

Government officials also need to understand the importance of treaties between tribes and governments, which are still binding legal agreements even though they were signed more than 150 years ago.

In addition to the new academic offerings, Bauerkemper and AIS Assistant Professor Rebecca Webster, an enrolled citizen of the Oneida Nation in Wisconsin, recently published the Tribal Administration Handbook, a resource for students and for tribal governments around the country.

They received funding from the Bush Foundation to write and edit the handbook, which took shape through extensive tribal consultation, a thorough review of existing literature, and surveys of practitioners and scholars.

“The handbook is general enough to guide all 580 federally recognized indigenous governments in the country, even though they operate very differently,” said Bauerkemper at a book launch event in November. “It purposely emphasizes the federal government and its engagement with tribal governments.”

Bauerkemper said it was important for the handbook to be easily accessible to tribal officials, so the publisher, Michigan State University Press, agreed to provide the e-book version for free to tribal leaders and administrators.

The goal of the AIS-Humphrey School collaboration is simple, said Bauerkemper: to prepare the School’s emerging public policy leaders to have productive relationships with Native nations in and beyond Minnesota.

“If folks are informed about Indian nations, sovereignty, and governance, they will make better decisions,” Bauerkemper said. 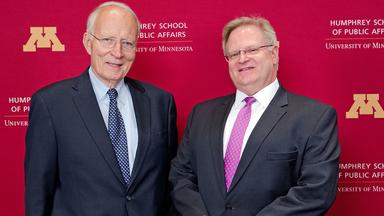 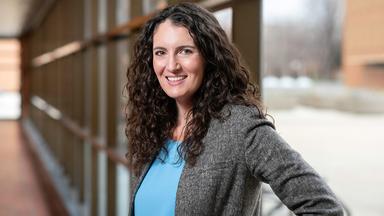