Ashley Fischer is pursuing a Master of Public Policy degree at the Humphrey School, after serving five years on active duty in the US Marine Corps and earning the rank of captain. A native of Gaithersburg, Maryland, Ashley continues to serve in the Marine Corps Reserve. She is a Humphrey Public Leadership Fellow and a Pat Tillman Scholar.

One of the things I saw when I was deployed was the use of military solutions for nonmilitary challenges. I was in East Africa, where we were doing counter-terrorism and counter-piracy work. From my perspective, the problems we were trying to overcome were development issues, economic issues, lack of opportunity.

Obviously the military has a valuable role and serves a meaningful purpose, but it’s not the solution to every single problem. I came back to school to gain the skills and a better understanding of the wider world of foreign policy and what’s available to practitioners.

Why did you choose to attend the Humphrey School?

Both my parents were in the Air Force so we moved around a lot. Their families are both from the Twin Cities, so this was always where we came for holidays, summer breaks, things like that. This is my second home, and I have a huge extended family in the area.  While I was on active duty with the Marine Corps, I was stationed in San Diego. When I decided to go back to school I heard about Humphrey through some of my family. The strength of the program, the professors here, the breadth of experiences that students have, were important. And being at the Humphrey School has given me the opportunity to be with family and live in Minnesota, which I’d never done.

What is it like being military at the Humphrey School?

The veteran community at Humphrey is small, and I find that refreshing. I’ve spent most of my life surrounded by military, so it’s nice to hear totally different perspectives and talk to people who have maybe never encountered anyone in the military. Not that I’m a spokesperson or an ambassador, but it’s nice to be able to say, “Look, we’re people too. We experience life the same way everyone else does, maybe just with some different challenges.”

One of the best experiences I’ve had is participating in the global crisis management simulation exercise that happens every year. It requires you to take your knowledge from the classroom and apply it to real life negotiation and discussion. We had retired Foreign Service diplomats come in and mentor each group, and that whole weekend left a huge impression on me.

What do you hope to do next?

Note: Ashley Fischer does not speak for the Department of Defense or the US Marine Corps. 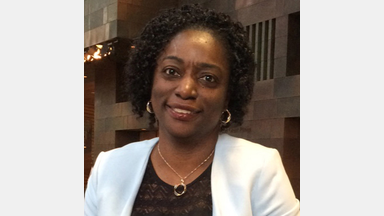