Looking at the Legacy of Retiring Professor Robert Kudrle

Kudrle, an economist, is one of three longtime Humphrey School faculty members retiring in 2020
Faculty
Global

By the end of this year, three longtime fixtures of the Humphrey School of Public Affairs faculty will have retired: Professors Robert Kudrle, Melissa Stone, and John Bryson.

Each has shaped the thinking and careers of thousands of University of Minnesota students, many of whom are now shaping the world we live in and the one we will leave behind.

Individually and collectively their scholarship has advanced and broadened the field of public affairs. Their careers have been both reflective of and instrumental to the growth and development of the Humphrey School.

Here is a look at the career of Robert Kudrle, who is retiring on June 30.
-----
When reporters at the Minneapolis Star Tribune newspaper need a source for an article about international trade relations or the economic impact of—say—tariffs on China, they typically pick up the phone and call Robert Kudrle.

Kudrle, the Orville and Jane Freeman Professor of International Trade and Investment Policy and director of the Humphrey School’s Freeman Center for International Policy, has been a go-to guy for the media on international business, trade agreements, tariffs, and tax policy for decades.

For more than 40 years, Kudrle, an economist, has been engaged in rigorous analysis of issues at the intersection of international business and public policy. He arrived at the University in 1972 with a doctorate in economics from Harvard University and a master's in economics from Oxford.

At the time the School of Public Affairs, as it was then known, was dominated by economists, and the curriculum largely framed public policy through the lens of economic and statistical analysis. It is a philosophy that Kudrle championed, both with his colleagues and with students, as the School grew and developed a broader focus on public affairs.

“I don’t think that economic ideas or conclusions should always dominate policy making, but I think economic analysis is very important and not something that one is likely to learn on one’s own or on the job,” he explains. “Therefore, I’ve always urged students to learn as much economics as they can.”

To that end, Kudrle, a radio disc jockey when he was in high school, has made it a point to translate economic concepts into ideas that are understandable, engaging, and relevant to students. For example, he posed questions to students in his microeconomics class he knew they could relate to, such as why airlines serve mediocre food even in first class (opportunity cost) and why pizza places run “buy-one-get-one-half-off” specials (marginal utility).

'A gift for teaching'

Anna Odegaard (MPP ’08), who is now a legislative advocate for the Minnesota Asset Building Coalition, appreciated Kudrle’s approach. “He made us puzzle our way through the concepts first so that when he got started on the math, it made sense.”

But within the first week of class, Waddell Boie recalls, Kudrle had changed her attitude and, ultimately, the trajectory of her career. Waddell Boie went on to earn her doctorate from Princeton in international relations, public policy, and statistical analysis.

“Professor Kudrle has a tremendous gift for teaching statistics,” she wrote in an email. “He weaves humor and enthusiasm through his teaching, all while taking the material from formulas to direct application. By the end of the course, I was enrolling in additional statistics courses and applying to be his teaching assistant.”

Kudrle’s research in international business and industrial competition has helped to broaden the Humphrey School’s focus, colleagues say. And he has been a staunch advocate for producing high-quality scholarship. As a faculty member and associate dean of research (1992-1996), says Kleiner, “Bob  was always interested in the quality of the research, the rigor, and the relevance of the work.”

J. Trout Lowen is a Minneapolis freelance writer and editor. 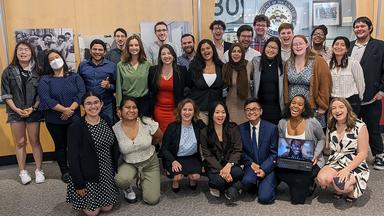