Student and faculty researchers at the Humphrey School of Public Affairs are part of a unique new partnership with a goal of better understanding conflict and finding ways to reduce it around the world.

The School recently launched a three-year collaboration with the Peace Research Institute of Oslo (PRIO), one of the world’s premier research institutes that explores the forces behind violent conflict and ways in which peace can be built, maintained and spread.

The project, funded by the Norwegian Ministry of Foreign Affairs, will support the work of researchers at PRIO and the Humphrey School in the areas of conflict prevention, violence reduction, and stabilization in fragile states. The grant objective is to encourage the two institutions to collaborate on research around those topics, to find effective ways of reducing conflict.

“PRIO has a long history of leadership in supporting peacebuilding efforts worldwide and I am proud of our partnership with them,” Humphrey School Dean Laura Bloomberg says. “With this project we are creating a win-win collaboration by blending PRIO's peacebuilding expertise with the research skills of our faculty, and our students' dedication to gaining globally engaged scholarship experience.”

Humphrey School faculty members Ragui Assaad, Ryan Allen, and Greta Friedemann-Sánchez are involved in the collaboration; all are researching issues associated with conflict in different parts of the world. So far, they have met twice virtually with their counterparts in Oslo to begin discussing areas where they can collaborate, according to Mary Curtin, the Humphrey School’s diplomat-in-residence and the principal investigator on the project. They will continue meeting regularly to hone in on the best topics for joint research.

“This is really significant support for the Humphrey School’s activities on these global issues, because it connects us on a formal basis with one of the leading global research institutes,” Curtin says. “It gives faculty and students an opportunity to work with Norwegian counterparts on these projects and to amplify our work.”

Curtin says the partnership is noteworthy because of its support for student work. This year, three PhD students are assisting the Humphrey faculty with their research.

In addition, master's degree student David Gottfried (MPP ‘21) is working directly with two researchers at PRIO. Gottfried says their project is examining the factors that lead to civil dissent in the United States, specifically whether a higher population of people in the 15-24 age group is a determinant to more civil unrest.

His role is to collect a variety of data on people in that age group from 1973 to 1995, the years covered by the research study.

“I’ve been focusing on global policy in my studies, but over the past semester or so have felt that maybe my path forward is more in the domestic sphere. So this is a really interesting confluence of two different aspects that I really like—that I'm working with a global institute on a domestic research issue,” he says.

One of Minnesota’s most famous Norwegians, former Vice President Walter Mondale, is partly responsible for making the PRIO-Humphrey School partnership happen, according to Mary Curtin.

The seeds were planted five years ago at an event in Washington, DC, to celebrate Mondale’s long career in public service. In attendance was Kåre Aas, a friend of Mondale who was Norway’s ambassador to the U.S. at the time.

They spoke of Aas’ interest in building ties between Norway and the Humphrey School. At the same time, PRIO was also looking at ways to make connections in the U.S., says Curtin.

After that initial conversation, it took a few years to work out the details of the agreement. But Mondale’s longtime association with the Humphrey School was a key factor, says Bloomberg.

“I am forever grateful to Vice President Mondale for sharing his vision of this partnership and then working closely with the Norwegian government, PRIO and the Humphrey School to help bring the vision to life,” Bloomberg says. “I look forward to this fruitful Humphrey-PRIO collaboration thriving for years to come.” 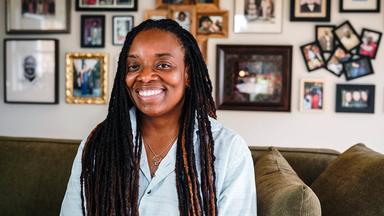 Leadership
Dean Bloomberg: The Humphrey School is Perfectly Positioned for a Transition of Leadership