Book Launch: Fix What You Can, by Mindy Greiling 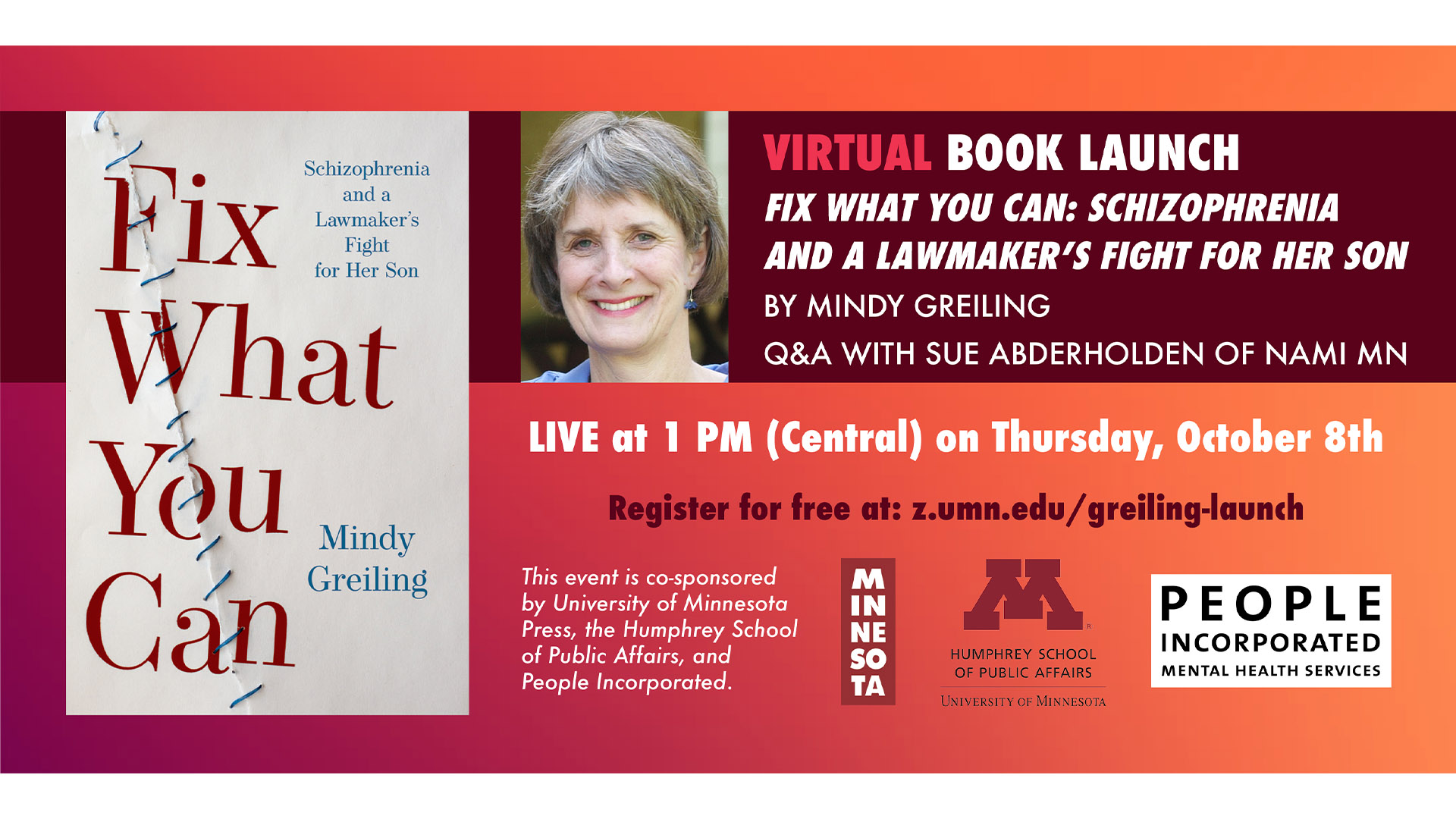 Join us for the launch of new book Fix What You Can by Mindy Greiling. This event will include remarks by the author and select readings from the book, followed by a conversation and audience Q&A moderated by Sue Abderholden, executive director for NAMI Minnesota (National Alliance on Mental Illness). This book launch is made possible in collaboration with the University of Minnesota Press and the nonprofit People Incorporated.

About Fix What You Can
In his early 20s, Mindy Greiling’s son, Jim, was diagnosed with schizoaffective disorder after experiencing delusions that demanded he kill his mother. At the time, and for more than a decade after, Greiling was a Minnesota state legislator who struggled, along with her husband, to navigate and improve the state’s inadequate mental health system. Fix What You Can is an illuminating and frank account of caring for a person with a mental illness, told by a parent and advocate.

Greiling describes challenges shared by many families, ranging from the practical (medication compliance, housing, employment) to the heartbreaking—suicide attempts, victimization, and illicit drug use. Greiling confronts the reality that some people with serious mental illness may be dangerous and reminds us that medication works—if taken.

The book chronicles her efforts to pass legislation to address problems in the mental health system, including obstacles to parental access to information and insufficient funding for care and research. It also recounts Greiling’s painful memories of her grandmother, who was confined in an institution for 23 years—recollections that strengthen her determination that Jim’s treatment be more humane. Written with her son’s cooperation, Fix What You Can offers hard-won perspective, practical advice, and useful resources through a brave and personal story that takes the long view of what success means when coping with mental illness.

About Mindy Greiling
Mindy Greiling was a member of the Minnesota House of Representatives for 20 years. She helped found the nation’s first state mental health caucus, which successfully lobbied for a significant increase in Minnesota’s mental health funding. She has served on state and national boards of the National Alliance on Mental Illness and is on the University of Minnesota Psychiatry Community Advisory Council.

About Sue Abderholden
Sue Abderholden has devoted her career to changing laws and attitudes that affect people with disabilities and their families.  Since the fall of 2001, she has served as the executive director for NAMI Minnesota (National Alliance on Mental Illness), where she has grown the organization to be the largest provider of family and public education and peer support in the state and the state’s strongest advocacy organization.

She has held leadership positions with Arc of Minnesota, U.S. Senator Paul D. Wellstone and PACER Center.  Sue has a B.A. in political science from Macalester College and a master’s degree in public health administration from the University of Minnesota.

Ms. Abderholden has received numerous awards for her advocacy, including the 2018 Rona and Ken Purdy Award to End Discrimination from National NAMI, Excellence in Mental Health Advocacy and Policy Award from the International African Mental Health Providers, 2013 Gaylord Anderson Leadership Award from the U of M School of Public Health, and the National Council for Behavioral Health 2013 Advocacy Leadership Award.