Tom Swain is a longtime government, business, community, and University of Minnesota leader who held a variety of influential positions during his distinguished career. 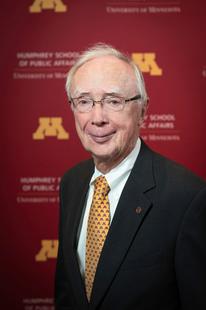 In the business community:

At the Humphrey School:

As a member of the Humphrey School Dean’s Advisory Council since 2003, Swain believes the School’s mission to “inspire, educate and support leadership for the common good” makes it ideally suited for this work.

The Humphrey School is working collaboratively across the University to maximize the impact of the Swain Climate Policy Series. A key partner is the University’s Institute on the Environment.