'The Worry is Always There:' Report Illuminates the Struggle of Living in Deep Poverty

“Money makes things so much easier. If you don't have it, life is so hard.”

Many of us can relate to this sentiment, expressed by research scientist Angie Fertig of the Humphrey School of Public Affairs. But, she notes, it’s especially true for people who live on the lowest rungs of poverty; what is referred to as deep poverty.

In statistical terms, deep poverty means an individual’s income is 50 percent or lower than the government’s poverty line. For a family of three, that’s $888 per month or less; for a single adult, it’s $517 or less.

Fertig and Robin Phinney, an adjunct instructor at the Humphrey School, are among the authors of a new report on deep poverty released last month by the Minnesota Department of Human Services (DHS). The report specifically examines how Minnesotans living in deep poverty often are in poor health, and recommends ways to address those problems.

People living on such low incomes typically can’t find a job that pays enough to meet even their most basic needs, or they’re unable to work because of serious health problems or disabilities. They may need to care for someone with health issues. They may not be able to find a job, or may not have transportation or other resources to help them hold down a job.

Earlier research has found the stress of living in deep poverty—with constant worry about how to pay for housing, food, and utilities, and how to care for children—often leads to chronic health problems such as diabetes, heart disease, autoimmune diseases, depression, and anxiety. Once these individuals develop a chronic disease, they don’t have the resources to manage it adequately and their condition deteriorates faster than it should.

Among those on Minnesota’s Medicaid program, adults and children in deep poverty go to the hospital more often and die at twice the rate of those who are not as poor.

An individual named Theresa (not her real name), who was interviewed for the study, illustrates this situation. Theresa and her husband have four children and also care for a parent with health issues. Her husband’s employment income is about $1,600 per month.

“I worry because sometimes I have money to pay the rent and the bills, but when I pay the rent and bills I don't have too much money for the groceries,” she explains. “So, one month I pay the bills and the rent, and the next month I … trade off. I don’t feel good because I have to make it stretch.”

Theresa has type 2 diabetes, but given her family’s income constraints, she often foregoes eating healthy food so her children can. When she does this, she notices an impact on her health.

The report also finds that deep poverty and its health consequences disproportionately affect African-American and American Indian people in Minnesota. The socioeconomic and health disparities they face are no accident; they have resulted from generations of systemic racism.

Fertig points out there are several government programs in place to support people with low incomes, including the Supplemental Nutrition Assistance Program (SNAP), also known as food stamps; the Minnesota Family Investment Program (MFIP), the cash assistance program for families with children; and General Assistance, which is cash assistance for single adults without children.

The problem, she says, is that all these programs are hard to navigate. They each have different forms to fill out, documents to submit, and eligibility rules to follow. So people often fall through the cracks. If they miss a deadline or forget to submit a form, they get kicked off the program and have to reapply.

Those barriers, sometimes called administrative burdens, have been put there by design, Fertig notes.

“The idea has been that we need to put up these barriers so people don't cheat the system, or so people who don't 'really need' these benefits don't get them. But the problem is, these barriers are so high that the people who can't get over the barriers are the ones who need help the most,” she says. “That's the biggest takeaway. It's not their fault that they can't get out of deep poverty, that they can't get the help that they need, because we've set up structures that are impossible for them to get through.”

Among the report’s recommendations:

These suggestions are intended to spark conversations about ways to reduce deep poverty and disparities among Minnesotans, the authors conclude. Ultimately, they will be up to the state Legislature to consider. Two of the report’s recommendations for increasing the income stability of families and decreasing the paperwork are being considered by the Legislature this session.

“Dr. Fertig was an invaluable partner, working closely with us on all aspects of the project,” says Justine Nelson, the DHS project leader. “She provided expertise that the Humphrey has an abundance of, from thorough literature reviews to interpretation of econometric analyses.”

Fertig, an economist whose research focuses on the health of vulnerable populations, says this project exemplifies the Humphrey School’s focus on collaboration and analysis of public policies.

“A lot of my research is policy focused. But nothing I've done has touched policy as directly as this project, so I think this reflects the mission of the Humphrey School the most,” she says.

“This is a well thought-out report looking at people that really need attention in the state. This was a huge effort by many people across several agencies, to evaluate different policies that could be implemented [to assist them], with the evidence behind it. So, I feel that this is the most Humphrey thing I've done.” 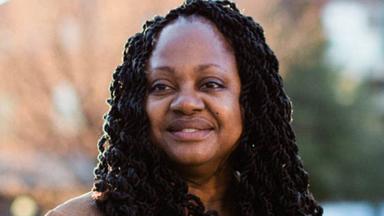