It’s only a matter of time before self-driving (autonomous) vehicles become a common sight on city streets around the country. And just as the Internet has completely transformed how we interact with each other in cyberspace, autonomous vehicles will no doubt transform how we move from place to place in the physical world.

A team of researchers at the University of Minnesota, including Professor Yingling Fan and research fellow Frank Douma from the Humphrey School of Public Affairs, is launching a three-year study to help plan that transformation. The National Science Foundation (NSF) recently announced the $1.75 million grant to fund the study as part of its Smart & Connected Communities program.

The grant, entitled Leveraging Autonomous Shared Vehicles for Greater Community Health, Equity, Livability, and Prosperity (HELP), supports fundamental research on the critical challenge facing many cities and communities—how to leverage the emergence of autonomous vehicles to rethink and redesign transportation services, and enable smart and connected communities where everyone benefits.

The project imagines an ambitious "smart cloud commuting system" based on giant pools of shared autonomous vehicles—ranging in size from passenger cars to vans, shuttles, and buses—that could complement and replace current transportation modes such as personal vehicles, public transit, and cabs. Unlike the car-sharing services of today, this on-demand system would not only serve users’ occasional, ad hoc trips, but also could meet their daily commuting needs.

If that kind of system were in place, fewer people may opt to own a car. Large parking ramps and surface lots may no longer be necessary. Streets and highways could be redesigned with narrower traffic lanes or more green space.

“Using shared autonomous vehicles will disrupt public and private transportation systems in many different ways,” says Douma, “much like ride-hailing services such as Uber and Lyft have disrupted taxi services. These issues such as infrastructure redesign and land use will need to be carefully thought out and planned.”

The rendering below from the College of Design illustrates how one city street in St. Paul could be transformed if autonomous vehicles become commonplace. 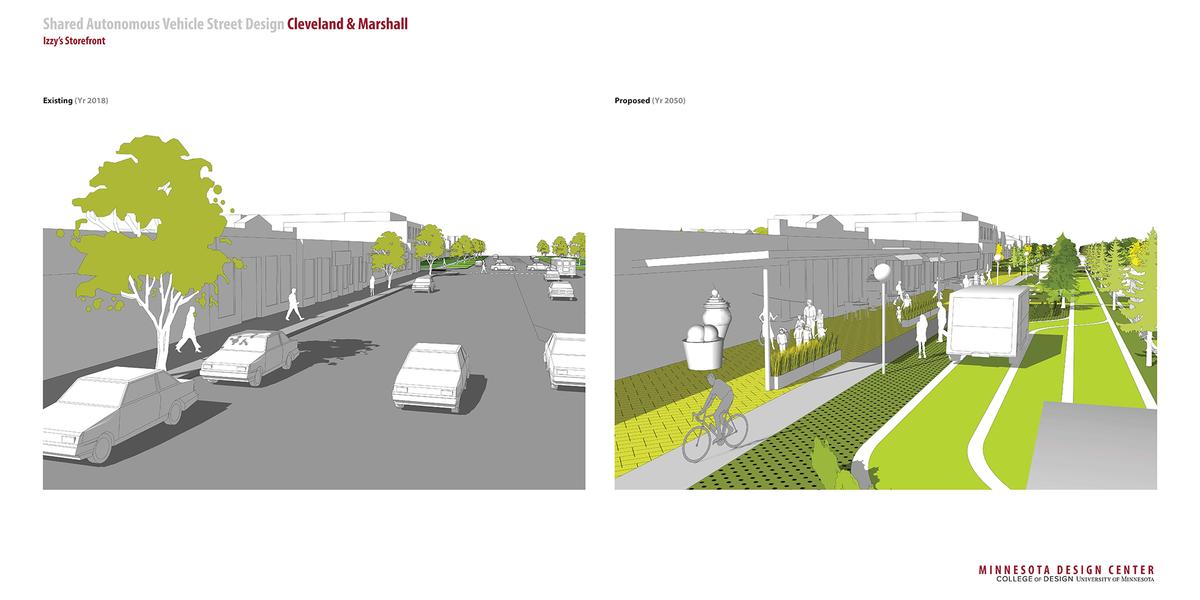 Douma is currently leading a research project examining how the ABC parking ramps in downtown Minneapolis can continue to serve as multimodal transportation connections, and they’ll be considered as a potential autonomous vehicle depot and mobility hub for the envisioned commuting system.

“One key barrier for people looking for jobs is a lack of transportation from Minneapolis to the southwestern suburbs, for example, which is an area with ample job opportunities,” says Fan. “Using autonomous vehicles in this way would provide affordable transportation services to all communities throughout the metro area, connecting them to essential economic opportunities."

Fan’s and Douma’s related research is one reason the Humphrey School is a good fit for this project. The School also has long-standing collaborative relationships with government agencies on all levels, businesses, and nonprofit organizations, as well as diverse communities and neighborhoods in working on a wide range of research, education and outreach projects.

“Those connections will be vital as we reach out to the community in this new research project,” says Douma. “We believe it’s important to engage with diverse communities to understand the broad socioeconomic challenges and impacts of shared autonomous vehicles, and work together to develop innovative solutions to promote greater community health, equity, livability and prosperity.”

“Public agencies are tasked with making long term investments in infrastructure, and those  investments last decades if not centuries,” Fan adds. “We’re hoping that this work will inform local and statewide decision making for our cities and communities, because getting these right is critical.”

The results of the three-year research project will include policy recommendations, design guidelines, and quantifiable information.