Climate Expert Katharine Hayhoe: Help Solve Climate Change by Talking With Others About It

Hayhoe's message in Swain Climate Policy Lecture: If we don't talk about it, why would we want to fix it?
Giving News
School
STEP

Noted environmental scientist Katharine Hayhoe says the best way to address the climate crisis is pretty simple: we all should talk about it with people we know.

That talk will lead to action, on an individual and then a community level, which will in turn influence governments, businesses, and other organizations to make the large-scale systemic changes necessary to mitigate the potential damage from climate change.

Hayhoe is chief scientist for The Nature Conservancy, a scholar at Texas Tech University, and author of a new book, Saving Us: A Climate Scientist’s Case for Hope and Healing in a Divided World.

Her presentation was co-sponsored by the Big Ten Conference's Democracy in the 21st Century collaboration, and students from all 14 schools in the conference were invited to participate.

Here are excerpts from Hayhoe’s presentation. Her remarks have been edited for length and clarity.

That’s important because our infrastructure, our food, our water systems, our cities, our supply chains, our economy – everything is built on the assumption that the climate is stable. It's been warmer before and it's been colder before, but thousands of years ago we didn't have eight  billion humans living on the earth and using its resources.

Climate change is not about the future of the planet itself. The planet will be orbiting the sun long after we're gone. It's about us humans and a lot of other things that share the earth with us. We are the ones most at risk.

When did all of this begin? It was in the 18th century and the Industrial Revolution, when people figured out how to dig up massive amounts of coal, and then oil and gas, from under the ground and burn it. That produces heat-trapping gases. Our planet already has a natural blanket of heat-trapping gases that keep us alive. But by burning fossil fuels, the emissions are like an extra blanket we're wrapping around our planet. and as a result the temperatures on the earth keep rising.

And that affects our weather, causing more dramatic and destructive weather patterns. For example, we just had three 500-year flood events in three years in the city of Houston. We saw a 100-plus degree heat wave in the Pacific Northwest last year.

Climate change is not a stand-alone issue. It affects everything else that we care about. It affects our infrastructure, our economy, our energy, our water, our natural resources, our health. It affects our food, our biodiversity, our conservation, our justice and equity issues.

Since climate change affects every aspect of our lives, we have to ask why we aren’t treating it like an emergency. It’s because of human nature and the way our brains are wired. Humans are very prone to something called psychological distance. We are very good at seeing risks as being far away from us in time and space, as abstractions instead of concrete issues.

There are surveys that show most people in the U.S. believe in climate change and that it can be harmful. But – most people don't think it will harm them personally.

How to solve the climate crisis:

I like to refer to John Holdren, a physicist at Harvard who served as President Obama’s science advisor. When he talks about how to address climate change, he says we have three choices: mitigation, adaptation, and suffering.

We can mitigate the situation by reducing our emissions. We can adapt by preparing for a different future. Or we can suffer. That's not a word you hear scientists saying often. Holdren explains that we're going to do some of each; the question is what the mix is going to be.

The more we cut our emissions, the less adaptation is required, and the less suffering there will be. These are the choices that face all of us. Not just climate scientists, not just decision makers, but every single person on this planet.

The big solutions to climate change look like this:

How individuals can make a difference:

Surveys show that the vast majority of us are worried about climate change, but half of us feel the situation is hopeless and don’t know where to start or how to help. So the goal of talking about climate change is to talk to all those people who are worried, help them understand how we can become active, and what we can do to fix this problem.

Sharing scary facts about climate change won’t motivate people to take action. If we don't know what to do, scary facts don't activate us, they just paralyze us.

What works is talking about how climate change affects us here and now, in ways that are relevant to our lives today. And then we start to look for solutions, like reducing food waste and eating more plants, biking or walking instead of driving when we can, urging cities and schools and universities to transition to cleaner energy, and so on. Then people will feel empowered and keep pushing for more change.

Our brains are wired this way, to associate forward action with a reward, not avoiding harm. When we produce hope, not dread, it encourages people to act. 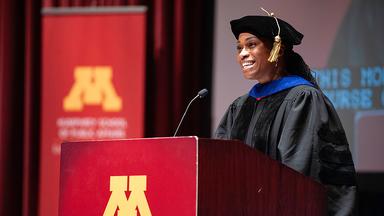