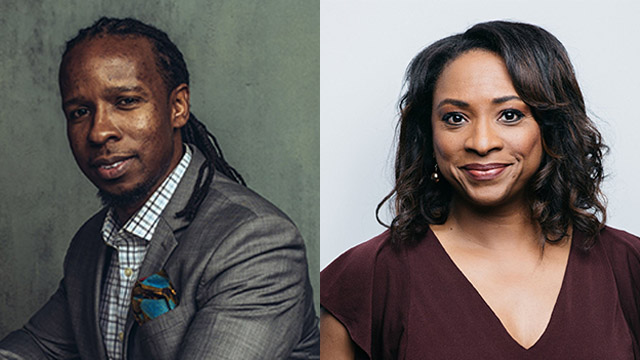 Update: There is a capacity limit of 6,000 for this event, and as of Friday, September 25, this event is officially sold out.

The Humphrey School of Public Affairs is pleased to welcome Professor Ibram X. Kendi, prominent scholar and author of the No. 1 New York Times bestseller How to Be an Antiracist, as the next speaker in its Distinguished Carlson Lecture series.

Kendi will discuss his book as well as his groundbreaking career advocating for equity and antiracism in conversation with Angela Davis, host of MPR News with Angela Davis, on September 30, 2020 at 6 p.m. CDT. The event will be presented virtually.

“The Distinguished Carlson Lecture series creates space for vital conversations focused on topics impacting the world,” Dean Laura Bloomberg said. “As our nation continues to confront a legacy of racism that has long been ingrained in our public institutions, it was apparent that Professor Kendi’s profound voice would offer insight for institutional change and wise community action at a time when we desperately need it.”

Registration is required, but free to the public. During the event, audience questions will be incorporated into the conversation. Attendees are able to submit a question for consideration when they register.

This event is presented by the Humphrey School of Public Affairs with support from Carlson and the Carlson Family Foundation. The lecture will be live captioned. If you need other disability-related accommodations, please contact Keith Hovis at [email protected] by Wednesday, September 23.

Ibram X. Kendi is a No. 1 New York Times bestselling author, the Andrew W. Mellon Professor in the Humanities at Boston University, and the founding director of the BU Center for Antiracist Research. Kendi is a contributing writer at The Atlantic and a CBS News correspondent. He is also the 2020–2021 Frances B. Cashin Fellow at the Radcliffe Institute for the Advanced Study at Harvard University.

Kendi is the author of Stamped from the Beginning: The Definitive History of Racist Ideas in America, which won the National Book Award for Nonfiction, and The Black Campus Movement, which won the W.E.B. Du Bois Book Prize. He is also the author of the No. 1 New York Times bestsellers How to Be an Antiracist and Stamped: Racism, Antiracism, and You, a young-adult remix of Stamped from the Beginning, co-authored with Jason Reynolds. Kendi most recently authored the No. 1 indie bestseller Antiracist Baby, available as a board book and picture book for caretakers and little ones.

Angela Davis joined MPR News in November 2018 after more than 25 years of television reporting and anchoring in the Twin Cities and other cities throughout the country. Davis is the host of MPR News’s weekday 11 a.m. program, which focuses on important issues facing Minnesotans and how the state is changing. She leads conversations that include insight from experts and the voices of listeners who call in during the live broadcast.

Before coming to MPR News, Davis anchored morning and evening newscasts at WCCO-TV in Minneapolis and KSTP-TV in St. Paul. She has won five regional Emmy awards for anchoring and covering breaking news.

For nearly four decades, the Humphrey School of Public Affairs, with support from Carlson and the Carlson Family Foundation, has presented the Distinguished Carlson Lecture Series, bringing to Minnesota world-renowned speakers to participate in a forum dedicated to the presentation and discussion of the most important policy issues of the day. The series began in 1980 with a gift from Curtis L. Carlson to honor his late friend, Hubert H. Humphrey, and to “contribute to the intellectual life of the greater Twin Cities community by sponsoring lively forums of broad interest."