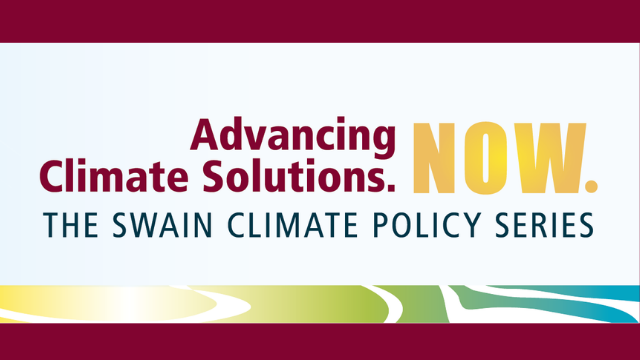 Center for Science, Technology, and Environmental Policy
Swain Climate Policy Series
Online
Please join us in kicking off Climate Week, five days of engaging events presented by the Humphrey School of Public Affairs in partnership with the Institute on the Environment, and co-sponsored by the University of Minnesota School of Nursing, as part of the Swain Climate Policy Series.

This virtual panel is free and open to the public.
Please Register to Attend

We will be joined by leaders from Project Drawdown, Nurses Drawdown, and Drawdown Labs. They will present the Drawdown framework, discuss their work related to Public Health, Climate Communications, and Climate Leadership in Business, and wrap up with a Question & Answer session moderated by Minnesota Public Radio News’ Chief Meteorologist, Paul Huttner.

You may submit questions for our panelists in the registration form.

Dr. Jonathan Foley, Executive Director - Project Drawdown
Dr. Jonathan Foley is a world-renowned environmental scientist, sustainability expert, author, and public speaker. His work is focused on understanding our changing planet, and finding new solutions to sustain the climate, ecosystems, and natural resources we all depend on. Before joining Project Drawdown, he was the founding director of the Institute on the Environment (IonE) at the University of Minnesota, where he was also McKnight Presidential Chair of Global Environment and Sustainability. Then, from 2014-2018, he served as the Executive Director of the California Academy of Sciences, the greenest and more forward-thinking science museum on the planet. Teddie M. Potter, PhD, RN, FAAN, FNAP, Clinical Professor - Population Health and Systems Cooperative; Director of Planetary Health - School of Nursing; Specialty coordinator of the Doctor of Nursing Practice in Health Innovation & Leadership
Dr. Potter is deeply committed to climate change education including co-founding Health Professionals for a Healthy Climate, membership in the Alliance of Nurses for Healthy Environments, and membership on the American Academy of Nursing Environment and Public Health Expert Panel. At the University of Minnesota, she is a Fellow in the Institute on the Environment. She designed and co-teaches an interdisciplinary course titled “The Global Climate Challenge: Creating an Empowered Movement for Change”. In addition, she co-leads a Health Sciences initiative titled, “Climate Change and Health: An Interprofessional Response”.  Todd Reubold, Director, Marketing and Communications - Project Drawdown
A seasoned media and communications professional, Todd Reubold is a senior leader in the organization focused on Drawdown’s communication portfolio, advancing a new focus on solutions storytelling, and building partnerships. Prior to joining the organization, Todd was the publisher and co-founder of Ensia — a solutions-focused nonprofit media outlet reporting on our changing planet. Todd has also served as communications director, and later, as an associate director with the University of Minnesota’s Institute on the Environment (IonE) where he led the Environmental Media Lab. Jamie Beck Alexander, Director - Drawdown Labs
Jamie Beck Alexander is a solutions-oriented corporate climate advocate, coalition builder, and founding Director of Drawdown Labs. Jamie leads Drawdown Lab’s work with companies to deploy climate solutions at scale. Jamie joined the Project Drawdown team from Ceres, where she led corporate engagement on the west coast, working with companies to set ambitious emission reduction targets and leveraging their influence in support of strong climate and clean energy policies. Previously, Jamie served as a Civil and Foreign Service Officer with US Agency for International Development (USAID), and has also worked with the UN Office of the Secretary-General, the design firm IDEO, and indigenous peoples in the US, Amazon and Andes.

Paul Huttner, Chief Meteorologist - MPR News
In 2007, Huttner was tapped by MPR News as its first chief meteorologist. He launched daily weather chats on its 40+ station network. He also created the popular Updraft blog. Huttner focuses on the “whys” of weather and climate beyond the forecast. In 2013, Huttner launched MPR News’ much-awarded weekly radio show, Climate Cast, which focuses on climate change news, science and solutions. A graduate of Macalester College in St. Paul, Huttner holds a bachelor’s degree in geography with an emphasis in meteorology. He is a member of the American Meteorological Society (AMS) and has been awarded the AMS Television Seal of Approval.